The Mythology of Bob Dylan and Leonard Cohen V: Places, Sacred Stories, and the Law

This summer at Shalem College I taught a course entitled New Skin for the Old Ceremony: The Music and Mythology of Bob Dylan and Leonard Cohen. I posted key songs, texts, and comments from each of the eight sessions on this blog. Read about previous topics with a click on Creation Myths, Masters and Teachers, Dreams and Visions, and Gods and Angels, Battles and Journeys. This is the final installment of the series.

This is how a poet takes possession of the pantheon--much the same way the Beatles staked their cultural claim in the album cover portrait of Sgt. Pepper's Lonely Heart's Club Band two years later. Just as mythic tales of the sacred canon populate the walls and ceilings of cathedrals, “Desolation Row” links a chain of myths, but with reservation and revision rather than dogma:

Yes, I received your letter yesterday
(About the time the door knob broke)
When you asked how I was doing
Was that some kind of joke?
All these people that you mention
Yes, I know them, they're quite lame
I had to rearrange their faces
And give them all another name
Right now I can't read too good
Don't send me no more letters no
Not unless you mail them
From Desolation Row Unless you are willing to visit Dylan in his perch, your message is unreadable, even offensive, because it ignores the fact that only reconstructed reality in the place of the poet's choice can preserve mythic meaning.


This is a site which is the opposite of Dylan's reworking of people and things in "Desolation Row," but the intent is similar: a single place tells the entirety of a mythic story--just like the Garden of Eden or Gethsemane or Mecca. Cohen sees all narratives flowing back towards simplicity and "the place where the suffering began." Dylan sees stories flowing from simplicity towards complexity. In either approach, their work is about making those sacred stories sing in new ways.

Sacred Stories
In his autobiographical Chronicles: Volume One, Dylan claims that a single myth serves as the touchstone not only for all of his work, but all of America as well:

I couldn't exactly put in words what I was looking for, but I began searching in principle for it, over at the New York Public Library, a monumental building with marble floors and walls, vacuous and spacious caverns, vaulted ceiling. A building that radiates triumph and glory when you walk inside….In one of the upstairs reading rooms I started reading articles in newspapers on microfilm from 1855 to about 1865 to see what daily life was like. I wasn't so much interested in the issues as intrigued by the language and rhetoric of the times....Back there, America was put on the cross, died and was resurrected. There was nothing symbolic about it. The godawful truth of that would be the all-encompassing template behind everything I would write….I crammed my head full of as much of this stuff as I could stand and locked it away in my mind out of sight, left it alone. Figured I could send a truck back for it later.

Recorded during the period of Infidels but released years later, "Blind Willie McTell" vividly demonstrates how a single story serves as a font for a flow of related stories that ultimately define a mythic vision:

In a soliloquy from a hotel window, Dylan describes the world of exile and ghosts emanating from the Civil War. He sees these martyrs perfectly, but he is not destined to join them, only to witness. He finds imperfection everywhere, especially in himself, carrying a voice that can never match a true seer. And still, his only choice is to keep telling the tale, a singer in the image of Blind Willie McTell just as "we all want what's His."
Leonard Cohen also describes his work as an echo of another grand story, the biblical landscape. In 1993, Arthur Kurzweil asked him about a line from "The Future" saying "I'm the little Jew who wrote the Bible." Cohen explains:

Oh, I am the little Jew who wrote the Bible. "You don't know me from the wind/You never will, you never did." I'm saying this to the nations. I'm the little Jew who wrote the Bible. I'm that little one. "I've seen the nations rise and fall/I've heard their stories, heard them all/But love's the only engine of survival." I know what a people needs to survive. As I get older I feel less modest about taking these positions because I realize we are the ones who wrote the Bible and at our best we inhabit a biblical landscape, and this is where we should situate ourselves without apology. The biblical landscape is our urgent invitation and we have to be there. Otherwise, it's really not worth saving or manifesting, or redeeming, or anything. Now, what is the biblical landscape? It's the victory of experience. That's what the Bible celebrates. So the experience of these things is absolutely necessary. 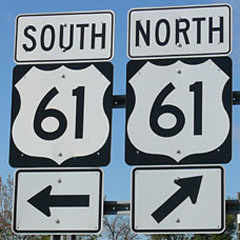 Sometimes Cohen and Dylan find themselves parked at the exact same spot, interpreting the same sacred story. In one case, it is indeed part of the biblical landscape. Dylan places the Sacrifice of Isaac on Highway 61, which runs right down the center of the United States, beginning in Minnesota at the Canadian border near Dylan’s birthplace and ending in New Orleans at the Gulf of Mexico. Also known as the Blues Highway, Highway 61 was a primary route of exodus of slaves from the South towards the industrial cities of the North "where many martyrs fell." As Dylan hears it:

Abraham is an easily corruptible huckster who builds an altar for his own son, a mythic model for four successive examples of the blind leading the lame. Cohen has a similar take on the blindness of the father in "The Story of Isaac." According to the biblical account, Isaac was blind. In Cohen's telling he sees everything, and the song squeezes paternal, authoritarian cruelty for all it is worth:

You who build these altars nowto sacrifice these children,you must not do it anymore.A scheme is not a visionand you never have been temptedby a demon or a god.You who stand above them now,your hatchets blunt and bloody,you were not there before,when I lay upon a mountainand my father's hand was tremblingwith the beauty of the word.
This formative myth seems all but impossible to shake--just like the Law.

The Law
In Franz Kafka's “Before the Law” a man from the country wastes his entire life waiting to enter the gate containing the Law. On the verge of death he discovers that the door he has been waiting behind had been meant for him all along if only he had  had the courage to open it.

Dylan's “Senor (Tales of Yankee Power)" offers a stunningly close parallel to Kafka's conflict. Yet his hero, standing alongside the messianic figure of Senor, wants to fight back:

Senor, senor, do you know where we're headin'?
Lincoln County Road or Armageddon?
Seems like I been down this way before.
Is there any truth in that, senor?
How long are we gonna be ridin'?
How long must I keep my eyes glued to the door?
Will there be any comfort there, senor?....
Senor, senor, let's disconnect these cables,
Overturn these tables.
This place don't make sense to me no more.
Can you tell me what we're waiting for, senor?

Dylan's freedom comes in kicking up against a force that looms too large for his comfort, a myth whose faces and names must be rearranged. When Cohen sees a seemingly immutable force, he bows to it and waits almost like Kafka's man from the country. But rather than falling to weakness and silence in his submission, Cohen makes the force of the will of the law his own. Consider "If It Be Your Will":


Dylan and Cohen are in continual dialogue and conflict with the Will of the Law, but their faith in their own creative powers to redirect myth defines a code for managing the friction it fuels--and making it hum. As Dylan sings in "Absolutely Sweet Marie," telling truth to the Law invites a person to stake a unique claim to it. But real outlaws "outside the law" can only survive if they craft a new code as part of this challenge:

Well, six white horses that you did promise
Were fin’lly delivered down to the penitentiary
But to live outside the law, you must be honest
I know you always say that you agree
But where are you tonight, sweet Marie?

Oh like a bird on the wire, like a drunk in a midnight choir I have tried in my way to be free.

True freedom is contradictory. A bird holds to a wire even if it could have chosen to fly away. The one "born with a golden voice" does not leave the chorus to sing solo. Freedom comes from abiding tensions between the obvious choices myths suggest and deeper truths that emerge only after challenging them and living with them.

As Joseph Campbell said when we started this conversation: "Myths are public dreams. Dreams are private myths." Great artists make hard-earned offerings of both.
Posted by Stephen Daniel Arnoff at 4:16 PM

Thanks for the series. You have an interesting perspective. I would think they points made could bear some longer exposition.