The Mythology of Bob Dylan and Leonard Cohen I: Creation


As a great poet once said: Let us compare mythologies. Last week at Shalem College we completed The History of Rock 'n' Roll (and Everything in It) in 10 Songs. Now we enter another rock 'n' roll challenge: charting, comparing, and understanding the mythology at the heart of the work of Bob Dylan and Leonard Cohen.

Mythology rules today just as it always has, shaping our essential conceptions about life, the world, and everything. Joseph Campbell writes in The Hero with A Thousand Faces:

Myth is the secret opening through which the inexhaustible energies of the cosmos pour into human cultural manifestation. Religions, philosophies, arts, the social forms of primitive and historic man, prime discoveries in science and technology, the very dreams that blister sleep boil up from the basic, magic ring of myth.

Greil Marcus extends this thinking into the realm of rock in his introduction to Stars Don’t Stand Still in the Sky: Music and Myth, a beautiful collection edited by Karen Kelly and Evelyn McDonnell:

This was a myth you could join by allowing it to judge the choices you made: between friends, between going to college or not going, studying one thing and not another, between clothes you put on and those you set aside—the choice you made, finally over just what country, as you defined it, you would be a part of, if you were to be part of any country at all.

Bob Dylan and Leonard Cohen both have had long and fruitful creative careers, producing a huge amount of material to consider. Ordering it with eight themes brings focus to the arc of mythic story these artists tell.


In addition to encountering Cohen and Dylan, special guests in this two-week course will include Franz Kafka, Abraham and Isaac, Joan of Arc, Robin Hood, King David, Satan, Buddha, Aphrodite, the Angel Gabriel and the Angel of Death, Shakespeare, and a carpenter from Nazareth, his mother and his apprentice.

Creation Myths
Artists are self-inventors. This is particularly true of rockers. From Joan Jett and David Bowie to Madonna and Prince, rock 'n' rollers create myth-laden names, identities, voices, and appearances that proclaim a place in the world different than everyone else. So too Dylan and Cohen, who conceive of their own roots creatively—how and where they were born and what shaped them—just as ancient tellers imagined the superhuman coming-of-ages of Moses or Jesus or Achilles. 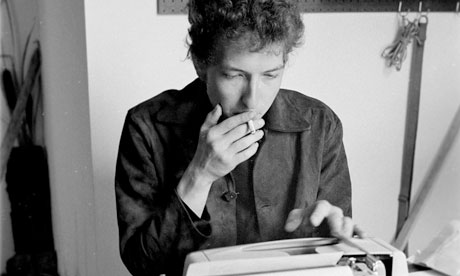 Dylan makes his "own depression" and bounces around backroads and jails, guitar in hand, so that he can inhabit a romantic, mythic reality that grounds his life in something grand.

In Leonard Cohen's 1960 poem "One Night I Burned," he describes a house—maybe his house of family origin and maybe a later, more grown-up home—as place of perfection he must burn and flee in order to become the person he wants to be:

One night I burned the house I loved,
It lit a perfect ring
In which I saw some weeds and stone
Beyond – not anything.

Certain creatures of the air
Frightened by the night,
They came to see the world again
And perished in the light.

Now I sail from sky to sky
And all the blackness sings
Against the boat that I have made
Of mutilated wings.

But Dylan and Cohen need to do more than craft a creation myth of the place from which they have come. They must also conceive of the place and purpose to which they are headed. This the myth of how their unique birth blossoms into an embodiment of a calling only they can fulfill.

The list of songs describing each these artists' calling as mythic artists is, well, kind of mythic. They have produced scores of maps and liturgies towards discovery that millions of people have used to shape their own yearnings to make a life.

We will make do with one song from each artist: Dylan's "I and I" and Cohen's "Show Me the Place."

In "I and I" Dylan tends to a melancholy tale of a lone wanderer who is clearly descended from the hardscrabble urchin of "My Life in a Stolen Moment:"

Noontime, and I'm still pushin' myself along the road, the darkest partSomeone else is speakin’ with my mouth,but I’m listening only to my heartI’ve made shoes for everyone, even you, while I still go barefootI and IIn creation where one’s nature neither honors nor forgivesI and IOne says to the other, no man sees my face and lives

As we will hear often over the next two weeks, Dylan combines raw urges for seeking and poetic lucidity in a story that shows him wrestling with love, loss, and the divine in equal measure.

Cohen describes himself as similarly melancholy and placeless, echoes of "One Night I Burned." Often, particularly in his later work, bowing to his burdens results in servitude that affirms his purpose, even as it leaves him humbled.


And so, with "I and I" and "Show Me the Place" as their first musical statements of purpose, we begin to seek the seekers.


For a lover of myth and music, it does not get much better than having the chance to prepare the songs, texts, reflections, and images that will guide a stroll through the gardens of some of the most profound artistry of the past half century.

Starting this Sunday evening, I will be writing about what the students and I find in this work. I look forward to seeing you here. And for those who want to hear more, join me Wednesday July 30 and August 6 at 3 PM EST to listen to some of these songs live from Jerusalem on JLM.FM. My commentary will be in Hebrew, but, as they say, the song remains the same.

Next Up: Masters and Teachers
Posted by Stephen Daniel Arnoff at 6:33 AM

Just a little comment about the theory of mythology, that we disscused today. The main thing that Campbell took from his teacher Jung, was the idea about the universalism of mithology. There are patters, symbols and constructions that we can find in different cultures that weren't had any connections with each other. The explaination of how this possible is the main discovery of Yung, who had disagreement with Froyd. Jung claimed that exept of the personal unconcious, which its origins are in the biological purposes of each of us, there is also a collective unconcious, which influence us by the power of ideas. By this theory, Dylan and Cohen, for example aren't just two individuals who create their music straight from their separate minds, but also actors of the deeper forces of society.

here are some myth's that compete each other.
https://www.youtube.com/watch?v=6HZ5V9rT96M

Interesting complement to Grant Maxwell How Does It Feel Presley Beatles Dylan and the Philosophy of Rock & Roll
http://njnnetwork.com/2014/07/how-does-it-feel-presley-beatles-dylan-and-the-philosophy-of-rock-roll/